You are here: Home / History / Memories of Treuddyn

These three photographs (below) were taken in Treuddyn infants school. I think the harvest festival was in 1951 or 1952. The Christmas party was also in 1951 and the nativity was in 1954 – I am the first angel, my maiden name was Jones.  I lived in Pant-y-ffordd – a row of five houses on the Corwen road, they were demolished many years ago.

I treasure my childhood memories of roaming fields and cycling the lanes on my new bike in Treuddyn.
Submitted by Jennifer Johnson.

The photograph below shows Church Walk in the 1930’s

The photograph below shows Llanfynydd Parish Council in 1913 with Helen from the Cylch’s great-grandfather in the back row fourth from the right.

“Although I’m not from Treuddyn I found your website and as you ask for any information and photographs about the village I thought I’d share these photos with you to see if they jog any memories. I was rooting through some boxes in the spare room and came across some photos and certificates belonging to my great aunty Myfanwy.

Marian Myfanwy Gordon, Anti Fanwy to us (my nain’s sister). Originally from Llys Farm, Denbigh. Trained and qualified as a midwife and district nurse at the Plaistow Maternity Hospital, West Ham, London (where the picture enclosed of her was taken). She nursed in the East End slums of London between the wars.

She returned home to North Wales and married William Gordon, Red House, Treuddyn. Lived in Ffrith, then Llys Awel, Llanfynydd but known to many as Nurse Gordon, on her bike, then a car around Treuddyn & Llanfynydd for 35 years as the district nurse and midwife. The original “call the midwife”. 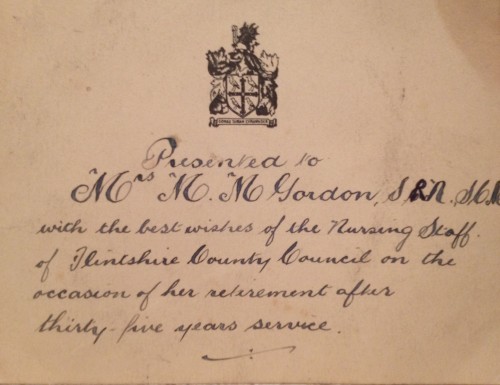