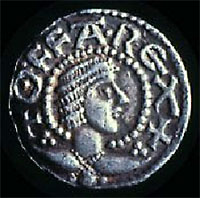 What is Offa’s Dyke?

Offa’s Dyke is an amazing 1200 year old linear earthwork which runs through the English/Welsh borders from Treuddyn (near Wrexham in north east Wales) to Sedbury Cliffs (on the Severn estuary, in southern Gloucestershire).

The Welsh scholar Asser, writing about a century after Offa’s Dyke is thought to have been built, famously describes it as linking ‘sea to sea’. Although archaeologists have not been able to confirm this assertion – there are major apparent gaps in Herefordshire and elsewhere – the surviving 129 kilometres of earthwork still comfortably amount to Britain’s longest ancient monument. The Dyke consists of an earthen bank which can be up to 8 metres high, associated with a ditch to the west, and typically occupies an imposing position in the landscape with fine and commanding views into Wales. It is not known exactly what the Dyke looked like when first built, but archaeological excavation suggests the western side of the bank was revetted with turf to create a near vertical face, and it is pos 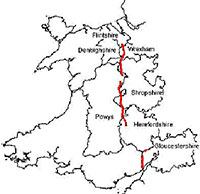 sible that some kind of palisade or wall also existed on top of the earthwork.

Offa’s Dyke is the most impressive monument of its kind anywhere in Europe, and a construction project of comparable landscape scale was not again to be undertaken for 1000 years until the great canal schemes of the 18th century. It is one of the great engineering achievements of the pre-industrial age and the most dramatic built structure to survive from Anglo-Saxon times – as such it is crucial evidence of a key phase in British history which has generally left relatively few substantial visible remains.

Even today, visitors to the Dyke are immediately struck by the sheer magnitude of the undertaking. You really have to walk along the Dyke to get an idea of what an extraordinary monument it is. First of all there is the size of the earthwork and a sense of the enormity of building the massive bank and digging the ditch with only hand tools. Then there is an appreciation of the engineering and planning skill with which the Dyke fits into the landscape whether skirting the Wye Valley in Gloucestershire, exploiting the contours, ridges and slopes of the Clun area in Shropshire, or marching purposefully across the lowlands east of Montgomery. And finally you get to thinking about the organisation and logistics behind a construction project like this, and the political control and sophisticated administrative systems which must have underlain it. And all this from a time which used to be referred to as the ‘Dark Ages’.

Offa and the history of the Dyke

The ‘Offa’ of Offa’s Dyke was King of the Anglo-Saxon Kingdom of Mercia from 757-796 AD. Mercia, centred on what is today the English Midlands, was one of a number of independent Kingdoms which had emerged in the mid/later first millennium AD from the gradual extension of Anglo-Saxon p

olitical control across much of former Roman Britain. Through military campaigns and political alliance, Offa established Mercian control over the majority of what we now call England. Although very little direct historical documentation relating to Offa has survived, we can still glimpse a powerful leader and astute politician who was treated as an equal by Charlegmagne, the greatest European ruler of the age.

Offa’s Dyke is the best evidence we have of the power and achievement of Offa. One can see the building of the Dyke as an attempt to rationalise a western boundary between Mercia and the independent British (Welsh) Kingdoms then present in modern Wales, who Offa had fought against w

ith only partial success in a number of military campaigns. Sir Cyril Fox, an archaeologist who made a pioneering study of the earthwork in the 1920s and 1930s, interpreted the Dyke as the product of a negotiated agreement between Mercia and the Welsh Kingdoms. More recent researchers such as Frank Noble and David Hill explain the Dyke more as a directly defensive earthwork built explicitly in the Mercian interest ata time of continuing instability along the presumed frontier.

Offa’s great earthwork has historical significance beyond the immediate context of ancient Mercia. The Dyke exemplifies processes ofincreasingly political centralisation across Anglo-Saxon Britain and contemporary Europe which were eventually to lead to the emergence of the geographical and cultural domains – such as England and Wales – we live with today. It could indeed be that the Dyke itself directly influenced such developments, particularly with respect to the genesis of a politically coherent Welsh identity in the early medieval period. Though short lived as an active Mercian/Anglo-Saxon frontier, its continuing existence as an evident dividing line in the landscape may still have been a powerful ideological statement of the apparent separation of all to the west from ‘English’ Britain, so helping to create a common sense of unity among Welsh peoples which had not previously existed.

It is perhaps testimony to the enduring legacy of Offa’s Dyke that it continues to attract much popular speculation about its origins, with some modern writers even questioning the association with Offa and ancient Mercia. It has been suggested, for example, that the Dyke is a much earlier prehistoric trackway, and one analysis of the geographical context of the King Arthur myth has claimed the earthwork as the ‘lost’ Roman wall of Septimius Severus on the basis of apparent references to such a wall in late Roman and early medieval texts.

While it would be wrong to dismiss such arguments just because they offer interpretations markedly different from the orthodox view, it is important to realise that there are very good reasons for the general dating of Offa’s Dyke to the Anglo-Saxon period. It can be compared most closely with other dykes – like the nearby Wat’s Dyke or the Wansdyke in Wiltshire – which are of likely Anglo-Saxon date, and at the same time is very different in detail from a Roman monument such as Hadrian’s Wall. Although lacking the absolute date that a demonstrably original building inscription or a sequence of radiocarbon dates might give, the Anglo-Saxon date of Offa’s Dyke is unequivocally established.

Offa’s Dyke – A boundary to the beginnings of Britain

There are other shorter Anglo-Saxon dyke systems in Britain, and those are unquestionably important and impressive and we are fortunate too in having fine surviving examples of Anglo-Saxon church architecture – but nowhere else can we touch that formative period in British history quite so dramatically as we do for mile on mile on mile of Offa’s Dyke.