You are here: Home / History / People 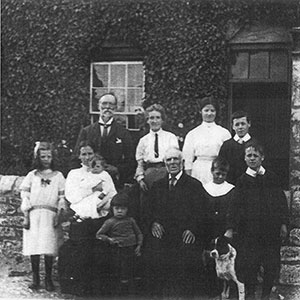 Prior to 1753 education in the area was largely limited to school masters funded by benefactors but which generally meant, at best, basic schooling one day a week. In January 1753 a school room was built and was to be run using the funds from a bequest administered by Trustees from the Hyde family of Nerquis Hall.  Families were expected to also pay for instruction and books so this was not a Charity School in the true sense.  By 1820 additional rooms were built, paid for by another member of the Hyde family, to accommodate the growing number of children in the area.  It should be noted that it would probably only have been village boys who were educated at this time.

In 1844 plans were submitted to build a National School at what is now Llys Degwm on Queen Street and Ffordd Y Llan. The title ‘National’ is taken from the full name of the authority which was the National Society for Promoting the Education of the Poor in the Principles of the Established Church. This was opened in 1845 and promoted by the Church. Records show approximately 40 children registered at the school although 200 children were in the village.  By the 1870s a new school was planned to accommodate increased numbers and was built at the junction of Queen Street and Ffordd Y Llan. – this was to be the infant’s school.  Both schools continued to run until 1953.

In 1885 a school was also established in Coed Talon, originally called the ‘Tryddyn Board School’ although the name was changed in 1904 to ‘Coed Talon Council School’.  This school started with 43 pupils but grew rapidly and by 1904 it had 157 pupils on the roll.  Over time additional rooms were added to house the increasing numbers.  In 1950 the school briefly became a Welsh-medium school, this ended in 1953 when the newly built Ysgol Terrig became the Welsh-medium school for the area and Ysgol Coed Talon resumed English-medium teaching.  Ysgol Coed Talon remained open until September 1992 when the school closed and moved its function to the newly built Ysgol Parc Y Llan which was built adjacent to Ysgol Terrig on the Treuddyn Campus.